BALTIMORE, MD – This past Spring, Hino Trucks announced the expansion of its product line up with the introduction of the all-new XL Series.  These Class 7 & Class 8 trucks were featured at the American Towman show in Baltimore last weekend with a fully equipped Miller Industries Century 3212 G2 medium-duty wrecker and an LCG16 Series carrier.  The Hino XL7 and XL8 models are powered by Hino’s legendary A09 turbo diesel 8.9-liter inline 6-cylinder engine boasting a B10 life of 1,000,000 miles.

“Over the years, Hino Trucks has developed a loyal customer base in towing and recovery market and we are excited to bring this new offering to this dedicated group,” said Glenn Ellis, Sr. Vice President of Customer Experience for Hino Trucks. “We set out to create a vehicle with best-in-class styling, ergonomics, and valued amenities and this new product is ideal for tow operators that require optimum performance and durability.”   The lineup also features new active safety solutions with electronic stability control (standard on tractor) and collision mitigation systems, innovative payload management suspension options, and a body builder friendly optimized design that was also engineered for maximum ease of serviceability.

Production of the new Hino XL7 and XL8 trucks will start in early 2019 and will be assembled in Mineral Wells, West Virginia at Hino’s new one million square foot state-of-the-art production facility.

The Hino XL Series has been coupled with the versatile Century® 3212 G2 that is designed with the capability of towing a wide range of vehicles, from passenger cars, vans, city tractors and motor homes. With multi-positional rear jacks, dual 15,000 lb. planetary winches and a 16-ton recovery boom the Century® 3212 G2 this unit was designed to handle a wide variety of recovery jobs.

Also on display at the AT Show is the Hino XL Series with a Miller Industries 16-Series LCG™ (Low Center of Gravity) carrier.  The patented design lowers the deck height 5 to 6 inches over conventional carriers. The lower height allows for the transport of taller loads such as forklifts or man-lifts that maybe over-height on a conventional carrier as well as providing better stability during transport.

Hino Trucks, a Toyota Group Company, manufactures, sells, and services a lineup of Class 4-8 commercial trucks in the United States. Hino Trucks is the premier heavy & medium duty nameplate in the United States with a product lineup that offers fully connected vehicles with low total cost of ownership, superior fuel economy, unmatched reliability and maneuverability and the most comprehensive bundle of standard features in the market. Headquartered in Novi, Michigan, Hino has a network of over 230 dealers nationwide committed to achieving excellence in the ultimate ownership experience.  Learn more about Hino Trucks at http://www.hino.com or follow us on Facebook, Linkedin, Twitter and YouTube.

Miller Industries Towing Equipment (NYSE: MLR) is the world’s largest manufacturer in towing and recovery equipment.  Miller Industries offers a variety of products from auto-load units with 8,000 lb. capacities to rotators with 75-ton capacities. All of which fall under the Miller Industries family of brands of Century®, Vulcan®, Chevron™, and Holmes®. For more information about Miller Industries and their products follow them on social media, visit their website at millerind.com. 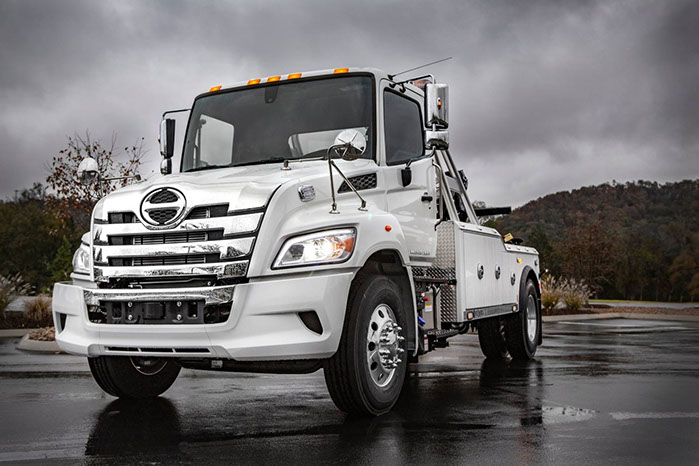